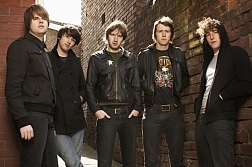 Britpop’s new stars Pigeon Detectives rocked Vienna’s über-hip underground club Flex for the second time in the last 12 months. The Leeds-based band, which rose to fame after playing a number of support acts for the city’s poster boys Kaiser Chiefs, returned to the Flex on Saturday after having performed there last autumn as well.

While the last time round the venue on the Danube canal was sold out, the five-member act did not attract as many fans this time around.

However, the band fronted by energetic singer Matt Bowman delivered an exciting 80 minute show which featured hits of their debut album "Wait for me" as well as new songs from this year’s "Emergency".