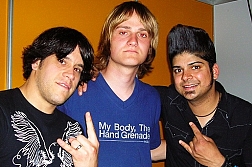 Last year you played at about 3pm, this time you’re headliner. Does that make any difference to you?

But come to think of your performance last time – wasn’t it amazing? There were so many people rushing towards the stage at this early time of day!

Ian: Absolutely, you’re right! We really enjoyed that. I remember how extremely hot it was, even worse than this time.

You seem to be on a never ending tour. How do you cope with the tedious periods that, I guess, come around from time to time?

Ian: We got used to be on tour all the time.

When have you been home for the last time?


Ian: We’ve been at home for a couple of days two weeks ago and we’re going home again on Sunday for an award show.

Ian: A video music award show of a programme called “Much Music”.

I read you were awarded at the Juno Awards. What does that mean to you?

Ian: They can be compared to the Grammy’s or the Echo Award.

So, a big honour then?

We watched you at Brixton Academy back in February. Was that show something special for you and do you think about breaking the UK?

Jon: We like how it is going there. We toured there about ten times or so, and we seem to get a little bit bigger every time. So far, we played the best places there, like the Astoria, Hammersmith Palais, Brixton Academy – it’s been amazing! I don’t think we’re selling too many records over there but when we tour it’s always much fun and great crowds.

Ian: It was certainly something special to headline the Download Festival.

Jon: But after all, England isn’t that important for us. We’ve got so many fans in Germany, Austria and Switzerland, we’ve been playing here so many times in front of extremely appreciating fans – those shows are the really special ones for us.

What’s next for you – taking some time off or going to the studio again?

Ian: We’re going to release a Live-DVD, then take some time off after the tour cycle. After that we’ll start writing again to make a new record.

At which shows did you record the DVD?


Ian: At Düsseldorf where we played quite a big show, and Brixton Academy [in London].

How close are you to SUM41?

Ian: We’re friends! I live in the same street as their bass player, I hang around with him a lot.

Have you ever met Avril Lavigne?

Ian: The Canadian music industry is very small. Once you become a successful band, you automatically know every other Canadian musician.

Ian, have you got any advice as far as hairstyling is concerned? Do you need a can of hairspray before each show?

Ian: No, not a can, that’s probably a bit too much. I maybe need a can a month. Use a blow-dryer!

Jon: He’s the exact opposite of me! I mean, I get out of bed and that’s it – two philosophies that work!

So, Ian, is it a good sign when your initial hairstyle is gone at the end of a show?

Have you ever damaged a hotel room?

Ian: Damaged a hotel room? Ahm… has anyone ever done any damage? I don’t think so.

Jon: Not on purpose.

Ian: We’re not that kind of band. We don’t throw things around and break things on purpose. I definitely leave a lot of empty beer bottles lying around every time.

Jon: And some vomit…

Did you feel embarrassed the next day in front of the cleaning personnel?

Ian: Of course! We were playing at the Give It A Name Festival and there was something in the water, so a lot of people got food poisoning – My Chemical Romance amongst them, a couple of guys from our road crew as well. I was puking the whole night and left a mess at the bathroom. I felt really sorry for the cleaning lady.

Do you have to share rooms on tour or do you have single rooms?

Jon: Well, one benefit of being headliner is having a room on your own.

Ian: We shared rooms for years…

Jon: …that’s why it’s really nice when you’ve got some space and time on your own because on tour you spend so much time together anyway.

When you’ve got a day off, do you take a look around where you are? I mean, here we’re in the middle of nowhere, but do you enjoy some culture in the cities?

Ian: Oh yeah! When we played in Vienna, I went to the Egon Schiele Exhibition at the Leopold Musuem, he’s my favourite painter. I always try to see stuff like that.

I guess you’re watching quite a lot of TV abroad. What’s the weirdest thing you ever saw on a foreign channel?

Ian: Naked people! There seem to be a lot of naked people on TV in so many different countries.

Ian: Yeah! The last time I saw a couple of naked people riding bikes. I think that was in Denmark – “topless bicycle day” or something similar. There were ladies on their bikes with their boobs hanging out! You never see something like that in America.

Jon: The European culture is definitely much more liberal.

Just be careful that you don’t switch to channels by accident that you have to pay for. This can lead to quite embarrassing situations at check-out the next morning [general laughter].

[Throughout the whole interview, Ian is gluing his fingers with super-glue.]

What are you doing?

Ian: I cut myself at a guitar string. Sometimes that happens and I keep going. So I put this on the cuts to block the blood.

Does that hurt when performing or afterwards?

Ian: It doesn’t hurt when I put this in. it helps me to keep on going.

How were music classes when you were at school?

Jon: I took all the music courses at high school because they were good – and it gave me the opportunity to practise playing bass.

But I guess you didn’t get into the music you’re doing now because of that lessons?

Jon: No, I got into rock’n’roll because of Guns’n’Roses and Black Sabbath. Those bands and their albums made me want to start playing bass.

Is there any song you don’t really want to play anymore live but you have to because people expect you to?

Ian: No, not really, I’d say. I always enjoy playing all of our songs and the crowd reaction to them.

Jon: Yeah. We also try top keep our material interesting because we develop the songs a little bit, they’re never totally the same as on the records.

Have you got a favourite?

Ian: Yeah, I also go for “This suffering”. The response to it impresses me time and time again. I also love “Fallen leaves” – all the people jumping up and down, just going for it.

Your show at „Rock am Ring“ was broadcast live by MTV Germany. [Markus Kavka,] the host of the show, said that he saw you before going on stage, looking pretty nervous.

Ian: I didn’t know that either. Oh dear!

Jon: After the show they gave us a DVD of it. We watched it immediately because we just couldn’t believe that we just did a show of that size.

Ian: Yeah! When I think back seeing all those people, many of them so far back – it was just awesome.

Quite a few punk and hard rock bands release records with acoustic versions of their songs. Do you think about that too?

Ian: I don’t know, to be honest. I mean, we’re doing radio shows in that style all the time, so I don’t think we’ll release an album like that. It’s also not really what Ben’s voice is made for.

Had he [singer Ben Kowalewicz] ever had any problems with his voice, losing it for a certain period or so?

Ian: Not really, fortunately! We hadn’t had to cancel much of anything. He’s got a pretty strong voice.

Jon: He takes care of himself too, what is probably the most important thing. He puts himself to bed early every night. You know, we’re always messing about until and he goes to bed.

Ian: If you’re instrument is, so to say, your voice, you have to take care of it because it’s the most precious thing you possess. It’s the same with the fingers of a guitar player [still “tuning” his fingers].

Jon: Ben’s a very focused guy, he wants to commit his best at each show.

Jon, last time we gossiped about the NHL and Tom Vanek, who we are quite proud of…

Jon: Oh yeah! He’s excellent, scored about 50 goals or so for the Sabres last season. I think the NHL should get rid of half the American teams. The competition should also include the best European teams, like, a Hamburg team and one from Vienna, for example.

“I never had Sex with a groupie”. Mando ...
Zum Interview am Nova Rock

“Luck is something that losers depend on...
Zum Interview am Nova Rock