Molotov Jive is one mind but I am the mouth! Sänger Anton Annersand über seine Position in der Band. - britishrock.cc

An Freunde weiterempfehlen
Nachricht an britishrock.cc
"Molotov Jive is one mind but I am the mouth! Sänger Anton Annersand über seine Position in der Band. - britishrock.cc"

Reviews
Interviews
Molotov Jive is one mind but I am the mouth! Sänger Anton Annersand über seine Position in der Band.
18.03.2008 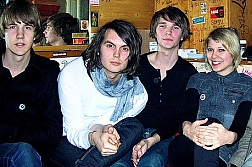 - „We are unique, you can´t compare us to anyone”
- „I just listen to old music from the 60s” und last but not least der Klassiker
- „We are the greatest band in the world“

I read a little introduction about your band on some internet site and there was written, that if you would put some history/biography lines of Sugarplum Fairy and Mando Diao together, it would be the perfect band- description for Molotov Jive. Do you want to counter anything?


Anton: I never read that! Molotov Jive is really personal for us; it is the main thing in our lives and it is what we built our identities on since we are 16. So it is really hard to compare it to other bands. Well of course, we come from quite the same environment as the bands you mentioned: small town, isolation and being really frustrated with that, playing music really based on 60s music. We are all friends with each other but I feel we are going in another direction, especially on our new record, which is already finished.

Actually that was my last question but let´s connect here: Tell us a few things about your new album. Do you already have a title?

Anton: We have a working title. It is called “Songs for the fallen apart”. It is about leaving and trying to find something new.

Anders: Compared to the old album, which is about dreaming of leaving, the new record is about actually doing it, leaving old things behind.

Anton: We have been leaving the town that very much built us as a band, the town, where we were the biggest. There we played in front of about 1000 people. Our life has changed since the release of the first record. We toured for about 2 years and we underwent a lot of weird things. I also had a relationship that went down in flames and that was also some kind of leaving. The sound changed too of course. Someone of our record company thinks that the record sounds like Bruce Springsteen on Speed. If you would fast forward Springsteen, it would sound like our new record. And I also would say the lyrics are really strong on the new record.

I would say your lyrics on the actual album “When it´s all over I´ll come back again” are really easy written and straight, easy to identify with…

Anton: Yeah, on the first album it was like that. I wanted to connect with people my age (note: 16 years) and I wanted to reflect their lives.

But after two years of going through a lot of mad things, the lyrics changed. Now it is hard for me to identify with the guy I was 2 years ago and so we also kind of leave the old life and songs behind.

Anders, are you writing lyrics as well?

Anders: No, I don´t like to. It just became naturally that Anton is writing the lyrics.

Anton: Yeah, I just picked up the pen since I am singing. I feel more when I sing my own lyrics. We are all close like brothers and I write songs about our personal experiences.

Anders: It is like we are writing the lyrics together because we know Anton so well. We know: “Ah that song is about that girl and that is about him and about me”.

Anton: We pretty much live together for 24 hours.

Anders: Well, not pretty much- we LIVE together. I share an apartment with Anton and Johan (note: Drummer)

Anton: Yeah, we share an Apartment in Stockholm. So when we come home from a month of touring we go home in the same apartment. We go to the studio together and so on. We see so much of each other, you have no idea. We work as a unit, although I am the pen and the mouth.

I haven’t seen you live but I have seen a couple of videos of you on youtube and you seem to be a LIVE-Band. So how hard is it to get the live energy of a gig on a record?

Anton: We record live in the studio. If we weren´t a live band in the beginning we certainly became one. When we started a band, we set up a list of rules how we are going to do it: We wanted to rehearsal every second day, we wanted to write stuff that we felt was important. One other rule was that everybody had to break up with his girlfriend to put as much time in the band as possible. Oskar was the only one with a girlfriend and we said “Sophia has to go man” and he was like “hmmm, ok” (general laughter). And one rule was to be really energetic and almost explosive on stage.

So we try to put the energy of our live gigs on our album through recording the album live.

If you read any miss-interpretation about your lyrics, do you feel kind of annoyed?

Anton: Actually not. If we release the songs, they are not only our songs anymore. They are now owned by everyone. We carry them for a long time but when we released them, everybody is free to have an opinion, even if they reflect everything on me and think “Anton did this and Anton did that” although it is not true. I am fine with that.

What is the song “The luck you got” about? I guess it is about Johan (Johnny)?

Anton: Yes it is! It is a really personal song. It was this night when Johnny went out and he got beaten up. We were really angry and thought “One day we pay you back rowdy”, well at least through our music. That happened because Oskar looked different and wanted to be different- that was actually the problem. The song is about the dream of coming back to our hometown and people want to be your friend but you can just send them away.

I read about your influences, like The Beatles and The Libertines and so on. Let´s get a little bit more detailed. I read you are driving with a VAN while touring, so let´s imagine you can record a Mix-Tape together for the journey. What songs would have to be on that tape?

Anders: We all would have very different songs from different genres on it.

Anton: Yeah! Me and Johnny are very much into old stuff, I never really listen to new stuff.

Anton: That is always a discussion for me and Anders. I just think that there is so much good music in the past to take influences from. If you want to sound like The Libertines you should not listen to them, you should listen to the bands they are listening to.

Anders: We always argue about that. I would probably put the Swedish band “Kent” on it.

Anton: Yeah it is a good thing that he is into new stuff. I come with the 60s- sound and Anders with the new stuff- together we sound like NOW. When we were supporting the Arctic Monkey I had no idea who they were. Anders and I are the biggest opposite characters in the band but that creates an interesting aspect.

Which classic would you like to have written yourself?

Anton: Strawberry Fields Forever and American Girl by Tom Petty. I guess Anders would like to have written “Last Night” by the Strokes.

Would I find a Roxette or Abba- Album in your CD- Rack?

Anton: I actually have an ABBA- Greatest Hit Album on my iPod at the moment. They have really good tunes.

Anders: My sister has all the Roxette albums, so if I would like to listen to them I could just borrow her CDs, butt I guess I won´t.

Anton: Our producer did actually the whistling in “Joy ride”. (note song by Roxette)

Is there any music you are listening to but you won´t tell anyone because it would be embarrassing for you?

Anton: If I would have that, I wouldn´t tell it here (general laughter)

Anders: Well, I also stand for the music I am listening to. I like Jazz music, Anton would say that is embarrassing.

Anton: Oh I really get pissed off sometimes. Anders and Jonny are really good musicians and they can play Jazz and all that and when we do soundcheck they sometimes start “jamming” and I hate that, it is annoying.

If you could form a supergroup, which musician even dead or alive, should be in that group?

Anton: I would basically want to sing, Tommy Ramone as a drummer and Nikki Sixx from Mötely Crüe as a bassist. Maybe Eric Clapton could be the guitar player.

That are musicians from the most different genres you could have picked.

Anton: Yeah, but imagine the sound.

Anders: I would like to have Julian of The Strokes as a singer, maybe Slash on guitar…

Anton: argh, I forgot to use Slash…

Anders: And drummer, well I never really listen to drummers.

Anton: You should pick Keith Moon because I didn´t use him.

Sounds good! How much is touring shaping your lifestyle, your lyrics and your music?

Anton: A lot actually. You go to all these new places, meet a lot of new people and get through a lot of new experiences.

Well, ah…I so regret I didn´t pick Keith Moon as a drummer.

Anders: Oh you can have him Anton.

Ok, you can change your supergroup…I read about (Anton interrupts me)

Anton: Well, I want to change my supergroup again. I want to clone myself into 4 people and build a quartet. Well…(thinks), actually that would be impossible because I couldn´t stand myself. That wouldn´t work out.

Do you have any rituals before going on stage?

Anton: YEAH, but they are extremely secret.

Anton: Well I shadow-box a lot and Oskar is warming up his throat. That is strange, due to the fact that he is not singing on stage. But maybe he is warming- up for Karaoke, because he loves Karaoke. That is the reason why we have to tour Japan.

Have you been to any good concert lately?

Anders: I was at the “Kent” concert and that was a really good one.

Anton: Well, I have been to a Molotov Jive concert in Innsbruck and it was a great show, it was fantastic. I think that was the last really good concert I have been to. (Laughter)

Thanks for the interview and see you later!