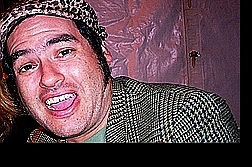 Which part of touring do you find the most tedious or annoying in some way? Playing music. Right… No, it’s true! I like the drinking part and doing the drugs. I also like to travel but playing music gets pretty tedious.

About ten years ago me and two friends found some “Heavy petting zoo” shirts in a shop. Each of us bought one. We had our hair dyed blonde and wore the shirts at the same time. People on the street asked us if we need medication – what would you have told us?

I would have asked you for your phone number to hang out together.

“The decline” is a very impressive, powerful record. Would it be the same to produce it today? Would it be as critical as you created it at that time?

I think it would be even more dark and critical. The things I wrote about were, in my opinion, the major problems at that time in the US when Clinton was president. The problems we have now are far worse. So, the content today would be different but I still believe in “The decline”. The United States of America are falling apart.

Have you got any plans, the upcoming elections in mind?

Nothing planned. Things are going pretty well at the moment. I mean, the mid-term elections. I think the Democrats aren’t much better than the Republicans but the Democrats are gonna take over anyway.

You sang in French once. Why French, why not German?

I didn’t pick the song [“Champs Elysees”, Anm.] because it was French, I just like the song. Name a German song that’s that good!

Well, good point. Does the location of a gig matter to you? I mean, the castle up there on the hill – isn’t it wonderful?

There’s a castle here? I thought there’s a brewery?

No, it’s a real castle. But as you mention beer – you sang about “Beck’s” – do you know any Austrian beers?

No, should I? Nah… But I changed my mind, “Beck’s” beer ins’t my beer anymore. I prefer Stella [Artois, Anm.] now.

How many demos do you get send from bands that want to get on your label (Fat Wreck, Anm.)?

No, I don’t know, I haven’t counted – I should have, but I avoided it.

Would you agree to speak your part in “The Simpsons” if they come up because they want you in the series?

Fuck, yeah! But we’ve been in it already!

Really? Shame on me then.

Well, just in a very small, short part. Bart stands next to a wall which says “Fat Mike” and “El Hefe” in graffiti.

Oh, cool! But you would speak your part if you appear in person?

We’re huge fans, but don’t get my hopes up!