„Some bands from Leeds got signed because of our success.“ Whitey (Kaiser Chiefs) im Interview - britishrock.cc

An Freunde weiterempfehlen
Nachricht an britishrock.cc
"„Some bands from Leeds got signed because of our success.“ Whitey (Kaiser Chiefs) im Interview - britishrock.cc"

Reviews
Interviews
„Some bands from Leeds got signed because of our success.“ Whitey (Kaiser Chiefs) im Interview
27.08.2007 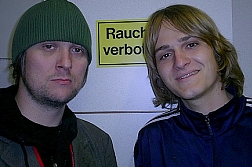 First things first: Your advice for all the people suffering at the campsite because of the heavy rain… The best advice is to be in a band, sell records and get paid to play. You get food for free, dry rooms and nice toilets. You seem to feel comfortable with your situation, being always a little bit in the background, not really in the centre of media attention. But you’re doing interviews. So, that’s ok with you?

Oh yeah, that’s fine. I don’t like any spotlight, that’s true. But I like to talk, I am a good talker. If someone listens to me I’ll always talk.

At the moment you as a band seem to ride on a constantly high wave of success. Can it get any better?

I hope so. But yeah, we’re doin’ really well, doin’ much better in Europe this year than last year. We want to be as big as possible – in Austria, France, Germany, wherever. But as long as people buy our records, it’s all good.

The most talk happening around the time when you released “Yours truly, angry mob” was about your sound being bigger now, maybe more guitar solos…

Well, nothing we did was really planned. Everything happened quite naturally. And I think that there aren’t guitar solos, really. I think that my playing accompanies the songs really well. But this time we were in a more expensive studio. We had more time to get the sound right. The first record – I mean, we’re very proud of it – was rushed, and it sounds rushed. This one’s more relaxed – and it is bigger.

How would you describe the relationship between Ricky (Wilson, singer, Anm.) and Nick (Hodgson, drummer and songwriter, Anm.)? Is there some kind of creative tension, a little bit of competition maybe?

There is no tension at all. It is unusual for Nick, being the drummer and writing the songs, because usually, the frontman or the guitar player writes the songs – so, someone in front onstage. Nick always tries to get a little bit of extra attention and tries to be funny onstage – but you can’t compete with Ricky. But there’s really no tension at all. That wouldn’t be the kind of environment we’d like to be in. We’re great friends who enjoy a laugh.

Whose the most ambitious of you, concerning career, success etc.?

I’m the least ambitious! I think that the other four are equally ambitious.

Ricky or Nick? Depends which song… but I think I can sing better than both of them!

What about the situation Leeds United is in at the moment? How hard do you suffer?

It’s even kind of funny because ever since Kaiser Chiefs took off Leeds Utd. went down! It’s depressing but now is the time every supporter should get behind the team, stop mourning and go to a match – which is what I always do when I’ve got the time.

How important is United for Leeds?

I’d say it is as everywhere in England or Europe. Football still is the sport of the people, the working class sport. It’s where everybody can go to shout and swear and to release tension.

And what about the music scene in Leeds?

Concerning music it seems to be as everywhere else. New music is on the up right now, there are a lot of new bands – I wouldn’t say just particularly good ones, but there’s something happening. There are a lot opportunities for bands to get themselves heard, which is good. I don’t think that Leeds has got any particular scene. When a band from a city gets big and becomes famous – like us, when talking about Leeds – all the record companies go there to look for other bands. Some bands got signed on the back of that, I’d say. It’s different with London or Manchester where there’s a lot more going on, obviously, but we’re not part of any scene. We are on our own, doing our own thing.

Do you miss anything when you’re on the road for a while?

No, not really. It would have been like that a year ago or so, but now I’m used to that. I also enjoy being at home, but I love being on tour. Most of the people are on holidays when they’re abroad – I’m working but that’s okay, I love it. My holiday is being at home which is fine.

Do you still remember your gig here, one year ago?

Yeah! Arctic Monkeys, Franz Ferdinand were playing as well, I think. We were hanging out with Arctic Monkeys a bit. It’s a shame we didn’t get the big dressing room this time – I think Seed are sharing it with Billy Talent. It’s something special to have it; you’ve got much more room and your own shower there. Now we have those showers where five guys are in at the same time. So, maybe we’ll be a bit smelly today… But yeah, last year was great, I remember the Franz Ferdinand gig which was really, really good. I like this place because of the location, this racing circuit. I love the Formula One.

You tried some of your new material last time…

Yeah, we did some songs… “Ruby”, “The angry mob” and “Heat dies down”, I think. It went down really well. I think we were on at about the same time, maybe a little bit earlier. I remember the wonderful whether we had. It’s always nice to come back to a familiar place. You turn up and you know where everything is – the catering, the dressing room, the toilets, the stage.

Please choose one of the following three options for 2027…

Their twentieth record, a double LP rock opera, is their best work yet.

Hmm… I like the third one although I don’t think that Ricky will become manage – rather Simon, I’d say (Rix, bass player, Anm.). But, let me think… I pick option three because I think we’ll do twenty records, although I expect the rock opera around album number five. But it would be nice to be still together, still making music somehow. But you never know, I mean… in twenty years I’ll be 53 – I hope I’ll be old… and fat…

In what kind of terms do you think? Two years, five years?

We’re thinking about the next record. We get bored pretty quickly. The public always wants something new. We wanna do something new, something fresh, something that excites us. We’ve played these songs, even those from this album, so often. We’ll take a break in the first half of next year and then we gonna start writing new songs and recording.

What’s the most over- or underrated Kaiser Chiefs song?

Erm… I don’t know! I don’t really read much press. But I get the feeling that we don’t get enough press. I think that people should be writing about us much more because live-wise we’re a very good band. We take music back to its roots – which is essential. We want people to enjoy themselves. We can make people jump up and down to a song that is about something very serious like “I predict a riot” or “Angry mob”.

Do you think you improved your live show over the…

Well, I think the lights improved but at the moment we’re playing quite badly.

Well, yeah. I mean, I’m just trying to be honest. We’re not playing badly on purpose. And I don’t think that anyone would notice except within us five. Festivals are quite hard. You turn up, don’t have a soundcheck, the sound is everywhere and nobody knows what’s happening. We have to refocus and hopefully we’ll be on it today. We always want to be the best band on a festival. We want people, when they go home, to think that we’ve been the best band, better than Seed or Billy Talent. If we wouldn’t think like that we’d kind of failed.

„If you come along and slap me, I ll fuc...
Zum Interview am Frequency Festival