FM4 as haven of hope for young bands and listeners - britishrock.cc

Reviews
Interviews
FM4 as haven of hope for young bands and listeners
18.07.2008 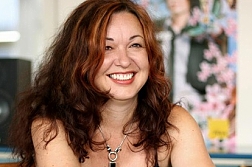 Vienna’s bilingual FM4 is not just another alternative radio station - for the 300,000 regulars it is regarded as a mirage in the desert of low-grade mainstream music. Even bands from Germany regularly state they would not be where they are now without the support of the Austrian radio programme which has existed since 1995.

Vienna’s bilingual FM4 is not just another alternative radio station - for the 300,000 regulars it is regarded as a mirage in the desert of low-grade mainstream music.

Even bands from Germany regularly state they would not be where they are now without the support of the Austrian radio programme which has existed since 1995.

britishrock.cc spoke to the people in charge at the radio station which has 50 per cent English language content.

Martin Blumenau has been with FM4 from the start in 1995. Infamous for his hosting style, many listeners have clashed with the abrasive 48-year-old.

For Blumenau, FM4 is Austria’s "essential media alternative". By having a closer look at what FM4 has achieved over the years, you can agree that he has a point.

The FM4 Soundpark, a free platform for new, yet rather unknown music is what the station is most proud of. Launched in 2001, as many as 4,700 Austrian artists have found a home on the online portal. Everyone can logon to the FM4 website and discover seemingly endless new, exciting material. Monika Eigensperger, head of the station since 1996, says, "I am proud we’ve been able to create a platform for all the creative potential there is in the country.”

It often happens that Austrian bands express their gratitude towards FM4 by stating they would not have been signed without FM4 who played their songs. Martin Blumenau says, "Of course, we think about our responsibility towards unknown Austrian bands.”

FM4 is often criticised for the fact many of the presenters have already reached an age which sets them apart from the listeners. Apart from Martin Blumenau, many other hosts have been with FM4 since it became a full-time station. Monika Eigensperger defends her policy by saying, "For me, it’s all about the quality - which also means knowledge and if someone has got something to say. Anchormen are like a good wine.”

The upcoming general elections do of course also play an important role in the programme which is known for its critical approach to politics. On the other side of the scale, partying is of course also something which forms a big part of what FM4 does. From live coverage of Austrian festivals and events to its very own birthday party, celebrated outdoors every year in the bracing January air.

Morning Show presenter Stuart Freeman is a bright ray of sunshine when he enters a room.

Freeman, who worked for British TV and radio before he joined FM4, explains, "In the UK, where you get categorised by your age, I would probably be working for an Oldies station. Here, I’m working for an alternative station - which is great!”

His Morning Show differs from other stations’ programmes not only because of its bilingual content. He says: "Once, we played a song twice because we liked it so much. I was told that if I had done that at other stations, I would have been fired. I replied I wouldn’t work at other stations.”

There is one thing that would tempt Freeman, "An offer from the BBC or something similar interesting would be the only thing for me to consider. And [iconic BB2 presenter] Terry Wogan still looks quite good, so I can see myself lasting a few more years here, and I’m very happy with that.”