LP announced as the newest addition to the INmusic #14 festival line-up! - britishrock.cc 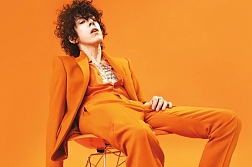 The unstoppable American singer-songwriter who won audiences worldwide with the hit single "Lost On You" is coming to INmusic festival #14 with a brand new album! The brilliant LP will be joining the legendary The Cure and Foals at INmusic festival #14!

Laura Pergolizzi, better known as LP, is heading to INmusic festival #14 as part of her summer tour promoting her newly released fifth studio album Heart To Mouth. The singer-songwriter lays all of her cards on the table every time she hits the studio trying to be as honest as she can. Known for her engaging and powerful live performances as well as the unique mixture of her expressive vocals, whistling melodies and the ukulele as her signature sound, LP will take over the Jarun stage in June 2019. This great artist has won the hearts of audiences with songs like "Lost On You", "Muddy Waters", "When We're High", with her biggest hit "Lost On You" exceeding 500 million streams in digital services. In just one year her singles have reached over 280 million views on YouTube, with excellent reviews from magazines like Billboard, V Magazine, Interview and many others. During her radiant career, LP worked with a number of great musicians, including writing songs for Rihanna, Cher and Christina Aguilera. So far she has performed at the world's biggest festivals such as Coachella, Osheaga Festival and Mad Cool Festival, and will play selected festivals next year, including INmusic festival #14. On her new album Heart To Mouth, LP speaks candidly about love, lust, fear, insecurity, infidelity, regret, and redemption, which have all been transformed into a musical body of work unique to her charm and sound.

INmusic festival #14 will take place at the Isle of Youth at Zagreb's lake Jarun from June 24th to the 26th , 2019. Three day festival tickets are available online via the official festival webshop for just 67 EUR, as well as seven day camping tickets for just 33 EUR.

An Freunde weiterempfehlen
Nachricht an britishrock.cc
"LP announced as the newest addition to the INmusic #14 festival line-up! - britishrock.cc"