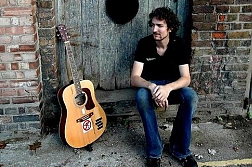 One of UK’s most successful artists of the past decade, the modern day punk troubadour, Frank Turner, is bringing his latest album to INmusic festival #14 along with his band The Sleeping Souls!

Frank Turner started his career as a singer of the post-hardcore band Million Dead, and the punk rock's influence is still felt in his songs despite his recent preference for the acoustic guitar. Turner released his seventh studio album Be More Kind in May this year, revealing his personal and political side, with his songs being both intimate and universal. These are songs that could be whispered in your ear, or hollered along to from the middle of a festival crowd. Through his albums, he has revealed his personal life and struggles, while his new album shows a new side to Frank which is more political and socially engaged. The folk/punk maestro from England is known as a simple and kind man best known for his heartfelt and intense performances that leave no one indifferent. Frank Turner is returning to the INmusic stages along with his band The Sleeping Souls which consists of musicians Ben Lloyd, Tarrant Anderson, Matt Nasir and Nigel Powell.

Frank Turner & The Sleeping Souls at INmusic festival #14 are joining recent Rock'n'roll Hall of Fame inductees, The Cure, the brilliant Foals, Kurt Vile & The Violators and LP, along with many more yet to be announced.