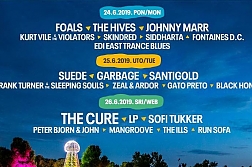 An impressive lineup, affordable ticket prices, and a carefree atmosphere in a one of a kind lake isle setting  all the key attributes defining Croatias INmusic festival for years now, by both local and world media, and catching the attention of more and more audiences form around the globe.

Due to wide audience interest the festival day-by-day schedule of the already announced artists performing at INmusic festival #14 has been revealed. Foals, The Hives, Johnny Marr, Kurt Vile & The Violators, Skindred, Siddharta, Fontaines D.C. and Edi East Trance Blues will rock the first day of the festival at June 24th. On June 25th, audiences will enjoy in the long awaited performances by Suede, Garbage, Santigold, Frank Turner & The Sleeping Souls, Zeal & Ardor, Gato Preto and Black Honey, and on the last day of the festival, June 26th, the stages of INmusic will be graced be The Cure, LP, Sofi Tukker, Peter Bjorn & John, ManGroove, The Ills and Run Sofa. A more detailed schedule of performances will be revealed by organizers in June at the eve of the festival.

The magnificent program and the extremely affordable ticket price for INmusic Festival has also been recognized by one of the most important music magazines in the world, the legendary New Musical Express, which has declared INmusic festival in Zagreb as one of the best and definitely the best value festival in Europe this year.