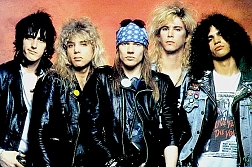 Guns N' Roses are planning to perform in Austria this year, it has been confirmed. A newspaper report claimed today (Weds) that the American hard rock legends are set to rock Vienna’s Stadthalle on 13 June.

But a spokeswoman for the venue told the Austrian Times: "The band will certainly not perform on the mentioned date, but I can confirm that organisers are currently holding negotiations about a Guns N’ Roses gig in Austria this year."

Others report, that the event date 19th June or 18th June, which is printed on "tour posters" on the internet cannot be hold and the concert could take place in early september, after Reading and Leeds festival, where the band will perform as one of the headliners.

The band fronted by Axl Rose most recently performed in Austria at the Nova Rock festival in 2006. Their headliner show was met with mixed reactions by the audience and widely rapped by the press.

Rumours over a show in Vienna this summer have been ongoing for months after "tour posters" featuring dates for Europe appeared on the internet.

Meanwhile Guns N’ Roses lead guitarist Slash has been confirmed to perform with his new band at this year’s edition of the Nova Rock festival.

The three-day event, which takes place in Nickelsdorf in the province of Burgenland from 11 June, is one of the biggest music festivals in the country. Around 50 acts – including Green Day, Slayer and Wolfmother – will entertain the masses.