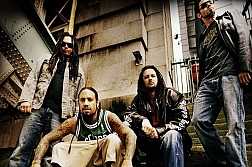 Hard rock legends Guns N' Roses will perform in Vienna this autumn, it has emerged. News from today (Weds) that the band fronted by Axl Rose will rock the Stadthalle on 18 September follow weeks of wild speculations over possible Austrian live dates.

The band – whose latest album "Chinese Democracy" was released to mixed reviews two years ago – most recently performed in Austria at the Nova Rock festival in 2006. Their headliner show at the event was harshly criticised by the press.

Former Guns N' Roses lead guitarist Slash recently announced he will perform at this year’s edition of the Nova Rock festival. The three-day event, which takes place in Nickelsdorf in the province of Burgenland from 11 June, is one of the biggest music festivals in the country. Around 50 acts – including Deftones, Stone Temple Pilots and The Hives – will entertain the crowds.

It was also confirmed today that American rock band Korn will hit the stage at the Gasometer concert hall in Vienna on 26 September. German techno act Scooter are lined up to rock the venue three days later.