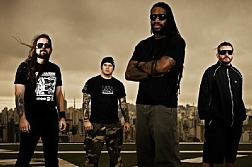 Sepultura delivered a stunning show in Vienna last night (Mon). Max and Igor Cavalera, the founding fathers of the legendary Brazilian heavy metal act, may have left the band years ago. However, Sepultura proved they have lost none of their live appeal as they delighted their Austrian fans at the Szene club in Vienna-Simmering yesterday.

The four-member band fronted by Derrick Green performed both classic tracks like "Refuse/Resist" and songs from their most recent recordings including the title track of their new album, "Kairos."

The gig took place just weeks before the Austrian Band Contest will be staged at the Szene (26 & 27 August, 2 & 3 August).

Swiss metal band Samael will rock the Szene on 5 August.

Meanwhile, it emerged that As I Lay Dying, NOFX and Gentleman will headline this year’s Picture On festival in Bildein, Burgenland. The three-day event, which starts on 11 August, also features Therapy?, Ignite, K’s Choice, Thirteen Days and Wallis Bird.

Leningrad Cowboys will perform at the season opening in skiing hotspot Obertauern, Salzburg, on 26 November and Scorpions will rock the Stadthalle in Vienna on 29 November.

Anajo will come to Vienna to play at the Chelsea pub and concert venue on 3 November before Wishbone Ash perform in the city next year (Reigen club, 5 February).