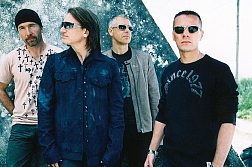 Rock superstars U2 will not have a Vienna live comeback appearance this year as a Jehovah’s Witnesses’ event is blocking the stadium on the band’s preferred days. The Irish four-piece reportedly planned to return to Austria on 7 or 8 August to perform at Vienna’s 51,000-seat Ernst Happel Stadium. However, the religious group has already leased the venue to hold a mass christening on both those days.

It is now looking unlikely the band will perform in Austria this year since all the other 120 concert dates of the upcoming tour are already in the planning stage.

Tickets for U2’s Vienna concert in summer 2005 were sold out within minutes.

U2 will release their 12th studio album "No line on the horizon" on 27 February. According to singer Bono Vox, the band stepped into unknown territory with their new material. He said: "The new songs sound different than anything we have done in the past – they are simply better."