The Sounds to step on Austrian soil - britishrock.cc 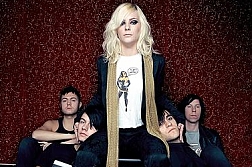 With some of the biggest festivals of the season, rock fans are fully focused on summer. And with temperatures on a record high, who could disagree?

However, the cool period of this year has great things to offer too as one of the most exciting Scandinavian bands are at the ready to perform in Austria. The Sounds, a five-member ensemble from Helsingborg in Sweden, will give a concert at Vienna’s Flex club on 21st November. The next day, the band will perform at the Conrad Sohm in Dornbirn.

Over the years, the Sounds (www.the-sounds.com) have increased their fan base across the world – by endless touring and electrifying live shows. The band fronted by charismatic singer Maja Ivarsson performed at some of Europe’s most popular rock festivals, but small night clubs with stages on which running around is ruled out are their favourite habitat. At such settings, the Sounds easily live up to their reputation.

While “Crossing the Rubicon” from 2009 is arguably their masterpiece, they nevertheless managed to meet the high expectations of fans and the press with “Something to die for”, the brilliant follow-up released in 2011. Songs like “Dance with the Devil” and “Better Off Dead” prove that the Sounds are in the lead when it comes to merging underground rock melodies with electronic beats. Their Austrian following can look forward to new material as the band are expected to present a new studio album shortly.