MGMT, Volbeat and Bring Me the Horizon in Sopron. First acts for VOLT '14! - britishrock.cc 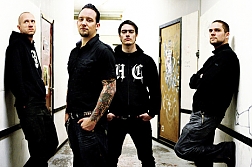 One week before Christmas the organizers of VOLT released 3 names for next year’s event. Volbeat, Bring Me the Horizon and MGMT will definitely perform in Sopron, Hungary, at one of the top 10 middle-sized festivals of Europe. As discounted passes were already sold out, now organizers made 2000 more available.

The organizers of VOLT have announced: “After this year’s success we expected big interest in next year’s festival. Before Christmas there were 3000 passes available on a discounted price. Because of the huge interest we increased this to a total of 5000 passes.” They said they are already working on booking the biggest stars for the 22nd VOLT. Norbert Lobenwein and Zoltán Fülöp have added: “We are very happy that we can announce names, which are on the top of the wishlist of our audience as MGMT, Volbeat and Bring Me the Horizon”.

MGMT, one of the biggest stars on the pop scene, will arrive to Sopron with their exciting music merging tunes as Bowie-like artpop, classic Beatles, psychedelic sounds, folkrock, glamrock of Queen and so on. This year they have released their new album ‘Congratulations’ and have evolved as a mature rock band.

Bring Me the Horizon is long-awaited for VOLT Festival. Grindcore, death metal and emo basics will guarantee that the monumental sounds will make everyone crazy. The Sheffield-born metalcore band will present their newest album of 2014, ‘Sempiternal’, spicing up the rock tunes with some electronic sounds.

In the music of Volbeat one can notice sounds from punk, country, classic rock’n’roll and metal as well. Their new album ’Outlaw Gentleman & Shady Ladies’ is said to be one of the best rock albums of 2013. The song „Room 24” has even been nominated at the Grammy Awards. The VOLT audience can enjoy the fascinating voice of Michael Poulsen in 2014 in Sopron.

VOLT Festival has received many awards previously in Hungary, but now it also entered the international scene and has been shortlisted in the top 10 middle-sized festivals of Europe at the European Festival Awards. Fingers crossed!

You can find last year's britishrock.cc-review and photos from Volt here.

An Freunde weiterempfehlen
Nachricht an britishrock.cc
"MGMT, Volbeat and Bring Me the Horizon in Sopron. First acts for VOLT '14! - britishrock.cc"