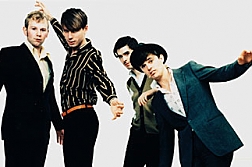 For the past few years, many Fuji Rockers have been guessing who will perform at this year's Fuji Rock during the winter. Last year we had a surprise line-up that noone could have guessed, and Fuji Rock has done it once again...
KANYE WEST, a major producer not only in hip hop but in the entire American music scene will be coming to Naeba this year. Rock tends to fill the majority of the line-up at Fuji but this year it will reset the boundaries once again.

And JACK JOHNSON. The organic mood that he creates with his music is sure to generate a happy and at home atmosphere in Naeba.

FRANZ FERDINAND put on an amazing Japan tour last year showing incredible live performances at all sold out shows, BASEMENT JAXX will make everybody dance and go crazy, and MANIC STREET PREACHERS will perform at Fuji for the first time in 13 years!
A total of 27 artists confirmed for the first announcement!