Due to health reasons, Florence + The Machine postponed their performance for INmusic festival 2016. - britishrock.cc 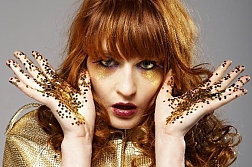 Earlier this year, in April, Florence Welch broke her foot during her headline show at Coachella festival. On June 23rd is, the date of the scheduled performance at INmusic festival 2015, Florence has a compulsory medical treatment necessary for the full recovery of her foot.

Unfortunately, this means it was necessary for the band to postpone their scheduled performance at this year's INmusic festival. Florence and her management are thankful for the audience's understanding and hereby confirm Florence + the Machine performance for INmusic festival in 2016!

To show how much Florence and the band care about their fans in Croatia they have already confirmed their performance for INmusic 2016 and Florence has taken the time to record a personal video-message for all of the fans who looked forward to the show at INmusic festival 2015. The video is available at the following link: https://youtu.be/pBKVr-O31mE and in it Florence states:

"Hi, I just wanted to say how sorry I am that I won't be able to perform. As you might know I've broken my foot in an accident that involves jumping off the stage. Unfortunately, the day of the festival is when it's going to be the first time I'm out of my surgical shoe and I have to practice walking around on two feet again. So unfortunately it means I can't come and play for you but I promise I will be there next year, on two feet, fully healed. And until then I'm just so so sorry that I can't be there. Sending you all lots of love, and thank you for being so understanding."

The organizers of INmusic festival are thankful that despite such force majeure reasons the performance is not canceled but postponed for INmusic festival 2016 when Florence will be fully healed and able to present our audience with her renowned energetic show. This is also a very unique situation for a festival – to have the privilege of knowing who one of the festival's headliner's next year will be. Zagreb is the first known city where Florence + the Machine will perform as part of their next tour.

Daily tickets for June 23rd can be exchanged for full three day festival tickets or returned with a full money refund. We ask everyone interested in doing either to please forward their requests to tickets@inmusicfestival.com Three day festival ticket owners will be given the exclusive opportunity to buy the most favorable early bird tickets for INmusic festival 2016. Please hold on to your tickets of this years festival as the early bird ticket purchase for next year will only be possible through the unique data issued on this years tickets. More info to follow soon on the official festival website.

INmusic festival is working hard on booking a new world famous artist who will be performing on the festival main stage on Tuesday, June 23. The newest edition to the 10th INmusic festival lineup will be announced soon.

An Freunde weiterempfehlen
Nachricht an britishrock.cc
"Due to health reasons, Florence + The Machine postponed their performance for INmusic festival 2016. - britishrock.cc"