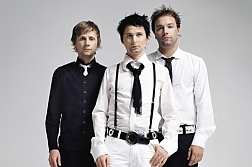 Muse are pleased to announce the Drones World Tour in 2016! The Drones World Tour will see the band perform for the first time “in the round” from the middle of the arena. This stage design and configuration will give fans a true 360 degree audio/visual sensory experience.

Muse.mu Members presale begins 16 September at 9am local. Please note you must have registered to the Members section before 9 September to be eligible for the presale.

For ticket links and to view all tour dates, click here.