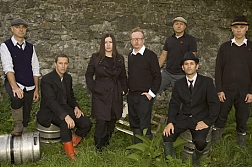 One of INmusic festival's favourite guests, the energetic, thrilling Irish-Celtic punk legends – Flogging Molly are set to perform on the Main Stage of the twelfth festival edition!

Flogging Molly – the outstanding Irish-American, seven piece Celtic-punk band was formed in 1997 in Los Angeles. Named after the Molly Malone’s pub in which they held their first gigs, they evolved their recognizable sound – a combination of traditional Celtic and rock music, by combining traditional Irish instruments with rock staples like guitars and drums.

Soon they attracted a significant number of fans and in 2000 the band released their first studio album, Swagger. The success of Swagger was followed by Drunken Lullabies in 2002, Within a Mile of Home in 2004, and Float in 2008, which became their most successful album with hit singles like Paddy's Lament and You Won't Make a Fool Out of Me, and their last studio album Speed of Darkenss released in 2011, which landed on the ninth place of the Billboard 200 chart and number four on the Billboard Independent Chart. Their long awaited, new studio album is expected to be released this year and the INmusic audience will be among the first in Europe to hear the band’s brand new material.

Flogging Molly are another fantastic addition to this year’s amazing line-up at INmusic, which is already set to be the most spectacular edition of the festival to date. This year’s line-up, along with the remarkable Flogging Molly, features the sensational Kings of Leon, Arcade Fire, Alt-J, Kasabian, Michael Kiwanuka, Slaves, Repetitor, Public Service Broadcasting and many more!

INmusic festival #12 will take place from the 19th to the 21st of June 2017 at the wonderful location of Lake Jarun in Croatia’s capital Zagreb. Tickets for three fantastic festival days are available for 53 EUR at the official festival webshopuntil March 17th.