„If you come along and slap me, I ll fuckin do ya!“ - Martin Saunders im Interview. - britishrock.cc

An Freunde weiterempfehlen
Nachricht an britishrock.cc
"„If you come along and slap me, I ll fuckin do ya!“ - Martin Saunders im Interview. - britishrock.cc" 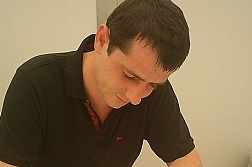 How do you like our beer? [with a can of Ottakringer] Too early to say because it’s my first one of the day. But it’s a good-looking can, nice and cold – yeah, it’s a nice beer, man! I’ll tell you at the end of the day when I had about ten of them. You’re the Birmingham City fan in the band, right? Yeah!

So, you’re in the Premiership again.

Yeah, what a good feeling! Don’t get me wrong: Championship football isn’t bad, it’s nice to watch. But the Premier League is the place to be! You gotta be in it, man! Well, we’ve got a good manager, we’ve had a great team last season, so we deserved to go up but let’s see how we’re doin’ this time because it is fuckin’ tough in the Premiership.


Martin: "The reason the NME wrote about us
is because we’re good."

Are you gonna stay up there?

Is there a lot of banter around football within the band?

Not really, man. I mean, if City would beat Villa 4:3 there would be some, but apart from that it’s not a main part of our lives. Of course you crack some jokes and as football is so important to people, it’s easy to wind people up. But there are more important things to talk about.

What do you think about Birmingham’s reputation – which isn’t the best. A lot of people say it’s quite boring, there’s not much to do. It is also often described as not very attractive and you hear that it can be quite dangerous to live there.

I don’t know man, to me it’s home, so… When you come around in England I’m sure you’ll find out that Birmingham’s not that bad – it’s good for shopping and for going out. You can’t compare it to London because there’s everything, and it’s much bigger too. But at the moment there’s a lot of money put into ‘Brum’. I’m going back there soon, and I’m really looking forward to it.

So you didn’t start to make music to get away from there.

"If you start bad-mouthing me, I’ll put you right!"

Do you feel the same kind of spirit with band like Oasis or Kasabian, this lad rock thing?

I don’t know, man. I mean, obviously we’ve got a lot in common. Honestly, I’d say that our music sounds quite different from them. I mean, it’s an honour to get compared to bands like that because they’re good. I don’t think we sound like Oasis, I think we sound like ourselves. In some ways we sound similar to some bands, in some ways we don’t – but it all comes naturally! We don’t sit together, thinking about how we would like to sound.

Is it important to you what the Gallaghers say? I mean, to me it seems that Serge and Tom [from Kasabian] try to please them and desperately wanted them as mates.

I don’t know, really. I mean, Noel’s a fuckin’ legend! He changed the way of so many people thinking about music. And when a legend says he likes you, you think “Fuckin’ hell, we’re doin’ alright!” And we’ve heard one or two stories that he likes us so we’re cool with that! But it‘s not like we go out and try to impress somebody, but if we get to meet Noel and have a drink with him, that’s fuckin’ great. The other night we went out with Peter Hook [former member of New Order] – I mean, that’s just incredible!

How important was your first NME article, how important is your attitude, what about MySpace – or is it just the music?

All of the things you said go together, I’d say. I mean, we know we’re good but being in the NME helped selling tickets at our first tour. When they write “go watch this band”, this definitely brings some people to do so. The NME still has a missive influence, though, now it seems they’re a little bit off us, so we’re doin’ it for ourselves now. After a couple of tours we proved that we’re good enough anyway. And the reason they wrote about us is because we’re good.


I’m a backing singer – I just can’t
play an instrument!

Did you ever had a night out without having a fight?

Well, that’s the NME who makes you think that, because we don’t fight. I mean, if I’m in a pub and you come along and slap me, then I’ll fuckin’ do ya, but I’ve got no reason to fight without an incident like that. I’d say I’m the same as most blokes. You go out for a drink and to have a laugh, don’t ya? I mean, we don’t go out to have a fight, we’re not fuckin’ hooligans, man. We’re normal fuckin’ lads who do normal things.

But was this image which was created good for you?

On one hand it wasn’t because it’s just wrong. On the other one, people got to hear about us that way which was good for our music in the end. After all, recognition for our music is the most important thing. Since our album’s out, I think we showed that we’ve got it.

Do you think the Brummie accent is the hardest to understand?

Not at all. Can you understand me?

Yeah. But do you talk slower when giving interviews to foreign press?

Not really. I mean, I’d put in some slang when I talk to my mates, but that’s all. If you go to places like Newcastle, for a start – I mean, I fuckin’ can’t understand a word they say! The Brummie accent is the reason to get a lot of stick but I don’t give a fuck, man. I never thought about changing it or find a different voice.

Is there still the same kind of rivalry amongst London, Manchester and Birmingham – as far as football, music and lifestyle are concerned?

London and Manchester have been much more successful with music and football. But Birmingham’s also a big city, man. We’re located in the middle and are a little bit left out of this whole thing but I don’t think it’s a competition. Maybe Northerners and Southerners got a little bit but we’re smack banged in the middle, so we don’t give a shit. To me it doesn’t make a difference where people come from. I don’t think I’m better than someone because he comes from London.

Is there something specific about the Midlands mentality or the people’s characters?

It’s hard to say because I never really sat down and thought about it. Perhaps there’s something, I don’t know. Maybe it’s the thing that we haven’t got no competition – we’re not bothered about lads in the North saying “Ah, them Southern fairies!” and Southern banter about the North. We don’t care, if ya know what I mean. I don’t know, man… We just do what we do!

Did you ever walk off from an interview?

Yeah. Nah… Not at all, not at all! Why should I? I mean, if you’d start bad-mouthing me, I’d put you right. We know that the press is a big part of what we do. I mean, we’re coming here and all the interviews we’re doin’ promote us. So, you don’t walk off from something that does you good, do ya? Unless you’re a bit of a twat. I never had a reason to – but I don’t know what you next question is…

Nothing nasty, no worries! Did you already realize the success you had so far? I mean, now you are the one who is onstage.

Yeah, some things are different – to play gigs, get free beer. But I’m still a fan as well. Today, for example, I wanna watch The View although I think they’re playing at the same time we play. The only band I don’t get to watch is – us.

Yes, it is. But I’m still a fan of music, that’s important. We just love music, man.

How did it come that you’re one of two singers onstage?

Well, the other three were already playing gigs. One afternoon, I popped in when they rehearsed. I had nothing to do, so they asked me if I wanna have a sing. I had a sing, and from then it just when on until now. Phil’s the better singer than me but we’re mates. So, he’d never tell me to fuck off. It happened naturally, now we’re writing songs together. We didn’t plan it to be different or something.

But it definitely makes you more interesting as a band.

That’s what a lot of people say. There are a lot of bands with two singers, but probably not two singers that don’t play instruments. I mean, look at Oasis. Noel backs Liam when he sings.

Except songs he sings himself, or exceptions like “Acquiesce”, a very special case.

That’s true. So, I’m a backing singer rather than a main vocalist – it’s that I just can’t play instruments!

But you’re comfortable with this state?

Yeah, I’m pretty happy man – I’m in Austria, drinking beers and having a good time – so it’s not a bad situation, is it?

Is it your very first time here?

Did you know anything about Austria before?

Erm… to be really cheeky, I don’t know anything. Don’t know, man. But I really thought about it. Then I remembered that Gerhard Berger’s from here.

That’s right. But the most famous living Austrian is, without any doubt, Arnold Schwarzenegger.

Ah, yes, he’s from here? Sturm Graz! Does he own the club?

No, he doesn’t. but the stadium was named after him – until they realized that he won’t change his opinion on the death penalty.

No way, man! What a bastard! What a fuckin’ nutcase, man.

„Some bands from Leeds got signed becaus...
Zum Interview am Frequency Festival